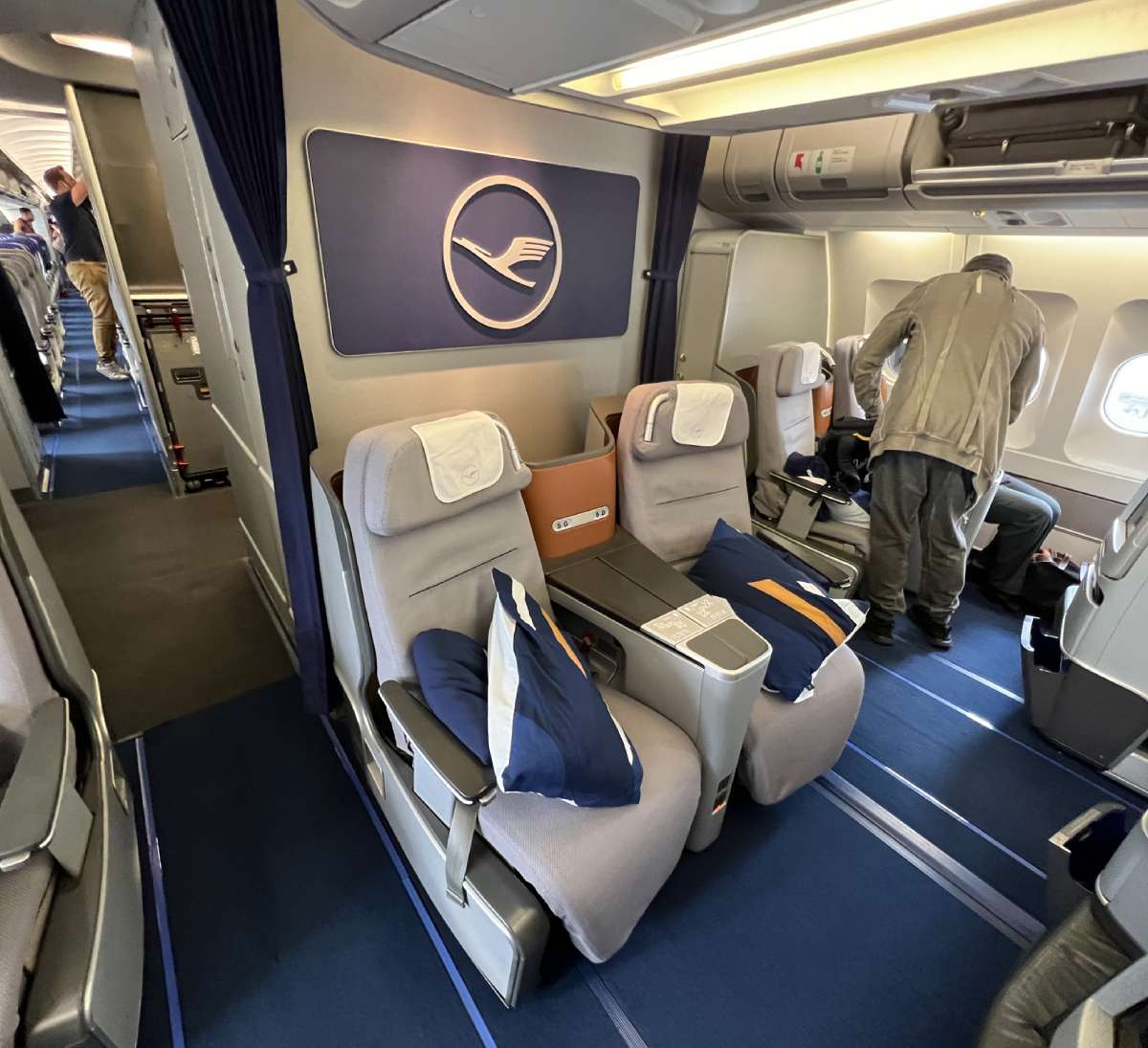 It has been a long time since I flew Lufthansa with the last time being pre pandemic on a 747 in Business Class from Frankfurt to Bangalore. There is something special about flying on a double decker with the upstairs cabin feeling exclusive and comfortable.

On this trip I was trying to get back to New York from Istanbul and the journey started with a flight on Lufthansa A321 from Istanbul to Frankfurt. That flight included a dreaded European Business Class but was mostly uneventful.

For this trip I was hopping across the pond on a A340-300 that features a reasonably small business class.

The flight was partially delayed by 1 hour so I was able to stop into the Lufthansa Senator Lounge at Frankfurt Airport. Unfortunately the business class section was closed this time but the lounge was mostly empty making it a great place to relax.

Shortly after we were ready to board and on our way. The boarding process started with business class and Star Alliance Gold members followed by a long cue for economy passengers.

What waited for us shortly after scanning the ticket was the dreaded bus to take us to a remote gate. I found this odd for such a premium route from FRA to JFK as well as the issue that the bus waited for many economy passengers too making it overly crowded.

On the plus side its rare to get such a close up look at a large plane. In the past when I boarded remotely the planes are generally smaller and designed for short haul flights. It was fascinating to just get the perspective of just how big some of these planes are.

We boarded the flight to a full booked business class cabin that made it feel a little bit cramped. Lufthansa also includes overhead bins in the center isle, which some airlines forgo to make the cabin feel more open and airy.

The seat layout on Lufthansa is generally just ok and is not ideal if you are flying alone. The thing I found most odd was not all the seats on this plane were designed the same. The seats towards the window had an odd angle to them and had slightly different layout of compartments.

The IFE screen on this flight also looked dated but included an interesting adjustment to account for the fact that your seat would be angled.

The flight started off with a welcome drink of champagne, juice, or water. I always like these little branded cups Lufthansa has and I find it comfortable to drink out of.

Shortly after they passed out the food menus, which is usually one of my favorite parts of the boarding process. Unlike United Polaris, Lufthansa actually passes out physical menus and they offering is fairly comprehensive with plenty of options. I also like that they always have a vegetarian option without needing to request a special meal in advance.

The drink list included 1 option for champagne as well as 6 different types of wines.

While still on the ground I always look up the wines to see what I would like to pair with my meal. Most of the wines retailed for less than $15 per bottle so not the most premium you can find on airlines.

At first I didn’t spot an amenity kit but after some digging around I found this Porsche Design pouch at the bottom of a storage bin. It was pretty bare bones but included most of everything you would need, especially given it was a daytime flight.

You can really see how dated this cabin is when you find the IFE remote. The screens were not touch and the only way to control it was this remote, which was not ideal.

I actually find the gaming controller on remotes to be interesting since I’ve never actually used it. Maybe it’s the nod to the past but this remote was set up like a gameboy controller.

I adjusted the IFE screen and was ready to browse the selection. At first I couldn’t figure out how to browse through it with the remote and then I discovered the mouse.

That’s right, the remote was actually a mouse that you can see with that small white square that appeared on my screen. I actually found this a bit easier to use, although old school, but the issue was with my partners mouse that was no where near as responsive as mine.

I don’t always consume content on my IFE and generally rely on Wifi to entertain me through the flight. What I’ll find out shortly is the Wifi was down for the entirety of this 9 hour flight, which I find to be brutal especially for a daytime flight that I want to be connected on and get work done.

Shortly after takeoff the dinner service started and I generally have high expectations for Lufthansa given the good meal I had on the 747 from Frankfurt to Bangalore. It’s hard to anticipate post pandemic food offering on airlines, where companies like United have a pathetic offering on a 9 hour flight from Geneva to New York.

I started off the meal with a Tuna tataki that was served with vegetable salad and a spicy miso mayo. The dish was well presented and I like that Lufthansa still courses your meals vs serving it all at once.

A closer look at the tuna it appeared appetizing although I thought there was a lot of mayo included. What I realized later is it wasn’t overly strong and it went well with the salad that had some vinegar in the dressing as well.

My partner went with the vegetarian appetizer that included sweet potato two ways, corn salad, and feta. While I don’t often get the vegetarian option on airplanes I’m noticing much more creative dishes being offered by airlines. This sweet potato was actually really good and next time I would consider ordering it over the tuna.

It was time for the main course and I decided to go with the prawn curry over rice. I was a little worried since the FA mentioned they may have run out, which is usually the downside to sitting towards the back of business class.

To my surprised she returned during dinner service with the prawn curry I was looking forward to. The small gap on the plate was from the sauce that they actually ended up just putting on top of the dish.

I find a curry on an airplane is one of the most comforting and well executed dishes. There is a lot that can go wrong with a piece of steak or chicken so I was excited to try this dish.

The curry was well seasoned and what I liked the most was the amount of prawns they included. I counted about 8 in my serving with a side of rice, vegetables, and bread.

My partner again went with the vegetarian option that was a pesto pasta served with red peppers and mozzarella. I found this dish to just be ok with the pesto a little dryer than I would have liked but overall a decent dish.

After dinner I went for the cheese plate as dessert that was a bit small but tasted really good. I found this to be enough to polish off the rest of my wine and the star was the fig jam that was served a long with the cheese.

Not every airline serves espresso so when they do I always like to have one after my meal. At this time the FA’s also passed out some chocolate that I didn’t try on board but took it home with me and it was delicious.

After the meal I was pretty tired so decided to get some sleep even though it was mid day. With no wifi on board I listened to some music and just relaxed after a long trip to Istanbul.

It was time for the pre arrival meal and this time I did decided to go for the vegetarian option that was an eggplant lasagna vs a cold salmon. I always opt for a hot dish vs a cold one so this was an easy choice.

The eggplant lasagna was served and the portion was actually pretty big. What I liked about it was it was just eggplant vs pasta that would have made such a big dish feel really heavy.

The flavors on the eggplant lasagna were really good although the texture was a bit off. I can only imagine how hard it is to execute this dish on an airplane but the way they served it actually worked and was plenty of food to eat before arrival.

Overall the flight was pretty good despite the lack of wifi, old seat, and slight delay out of Frankfurt. What really set this flight apart was how nice the FA’s were and how often they came to check if you need anything.

While Lufthansa is not the first airline I pick when planning a trip I would happily fly them again. Now that United Polaris has cut their offering significantly Lufthansa may be one of my Star Alliance picks along with Turkish Airlines as the best way to get across the pong.