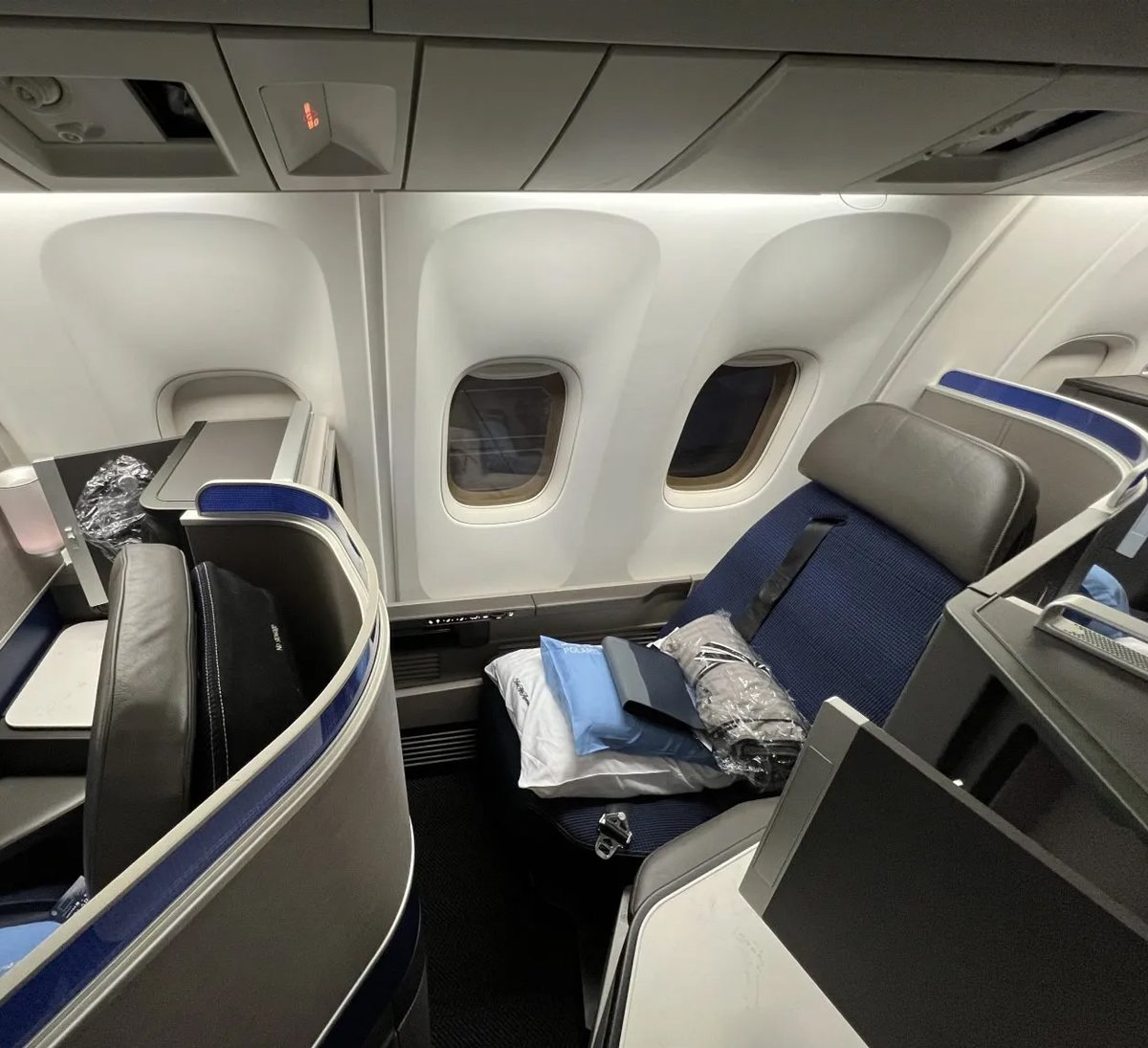 United Polaris is one of the best business class among the US based airlines. We’ve flown this route before from Newark to Frankurt and had one of the most comfortable flights of all time. On that trip we were on a 787-10, a larger plane, however the 767 might be even more special especially if you are traveling alone.

When flying United Polaris you need to make sure your plane is one of the retrofitted ones. United still flies older planes dubbed Polaris, like we flew on a 787-9 from Newark to Rome, that is no where near as nice as the new planes. In fact, unlike most Polaris routes, we don’t recommend this as the best airline to fly to Rome.

I was originally booked on this route in Economy but decided to pay for an upgrade to Polaris a day before. The upgrade cost me 30,000 United Miles and $400, which was well worth it for an 8 hour red eye flight.

There was no immediate space available so I decided to be put on the waitlist.

A few hours from being on the waitlist I got confirmation of my upgrade. Unfortunately as soon as I saw the seat map there was no much availability this last minute.

On this plane Polaris is configured into a 1-1-1 layout, giving each seat direct aisle access. Not all seats are created the same with the odd rows positioned nicely against the window for more privacy.

Although not ideal for couples traveling, these new Polaris seats have a pod like structure and provide well above average privacy.

I arrived at Chicago O’Hare a few hours early for my flight excited to check out the Polaris Lounge. I visiting the United Polaris Lounge in Newark a few months back and it was one of the nicest I’ve ever been in.

Unfortunately, at this time the United Polaris lounge was still closed. I was greeted by a disappointing sign as soon as I got there.

I decided to make my way to the United Club that was located close by. It was very crowded at this time and was no where near the experience of a United Polaris lounge.

All United clubs tend to be similar in my experience with the Chicago one mirroring the United Club in Newark. If you are there early make sure to scout a seat because they can be hard to come by but keep your expectations low as there isn’t much to offer but a space to try to realx.

I ended up leaving a bit early and eager to get to my gate.

There was a decent line at the gate but there is nothing like boarding in business class group 1. I made my way onto my plane and eager to see my seat.

The cabin was entirely full on this flight but the layout was as nice as I imagined it would be.

Lucky for me I was able to snag a tucked in window seat 7L. This is exactly the seat I wanted but was not open when I was first upgraded.

I kept checking each hour leading up to my fight and on my way to the airport I was excited to see one open. I quickly grabbed it and was set.

This is a reminder that even if you don’t get the seat you want definitely keep checking as things can often move around especially on the day of departure.

The seat features a large screen and I had no neighbors in sight when seated.

The seat also has a convenient set of controls right along the side making it easy to adjust into any position. This is best seat layout, unlike one I flew on Singapore Airlines from Singapore to Newark, that forces you want to flip down when you want to go into bed mode.

I got my amenity kit and was situated ready for the flight.

The seat has decent storage with a headphone compartment featuring a water bottle. However, once I closed it I had some trouble opening it but it eventually gave.

The flight was projected at 7 hours and 20 minutes of flying time with a total time of 8 hours. Not bad from Chicago to London.

The wifi on this flight was also pretty good with almost 20 mbps download speed making it easy to get some work done.

Now came the part I’m always most excited for, the food. I don’t usually get seafood when flying but I decided to try the salmon served with veggies and grains on this route.

United did not have a menu on this route and instead the crew mentioned each dish. Also notable is plastic drink ware, which has been common throughout the pandemic.

All meals are still served on a single tray and the salmon dish was accompanied with a side salad, nuts, a pretzel role, and mango sorbet.

The salmon was actually better than I expected and not overly dry. It accompanied well with the sauce, which I couldn’t put my finger on.

I found the meal to be pretty good but nothing over the top. It sure beats other food I’ve had flying so I had nothing to complain about.

A few hours before landing we were served breakfast. This time I went with the eggs, potatoes, and sausage.

Breakfast is one of the hardest meals for airlines to execute well and is usually a sore subject. This meal was served with fresh fruit, a not so good croissant, and a yogurt.

While the breakfast didn’t look the best I still found it pretty decently done. These eggs were similar to the egg bites you get at starbucks and I certainly finished it all before landing.

All in all the flight was one of the most comfortable ways to fly to London. I got plenty of sleep and arrived early at Heathrow to get on with my day.

United Polaris is one of the best ways to fly to Europe and this cabin especially is one of the most comfortable. If you are deciding between United and other airlines make sure to confirm the aircraft to snag on the new Polaris seats and hopefully you’ll be able to check out the lounge too now that they are reopening.