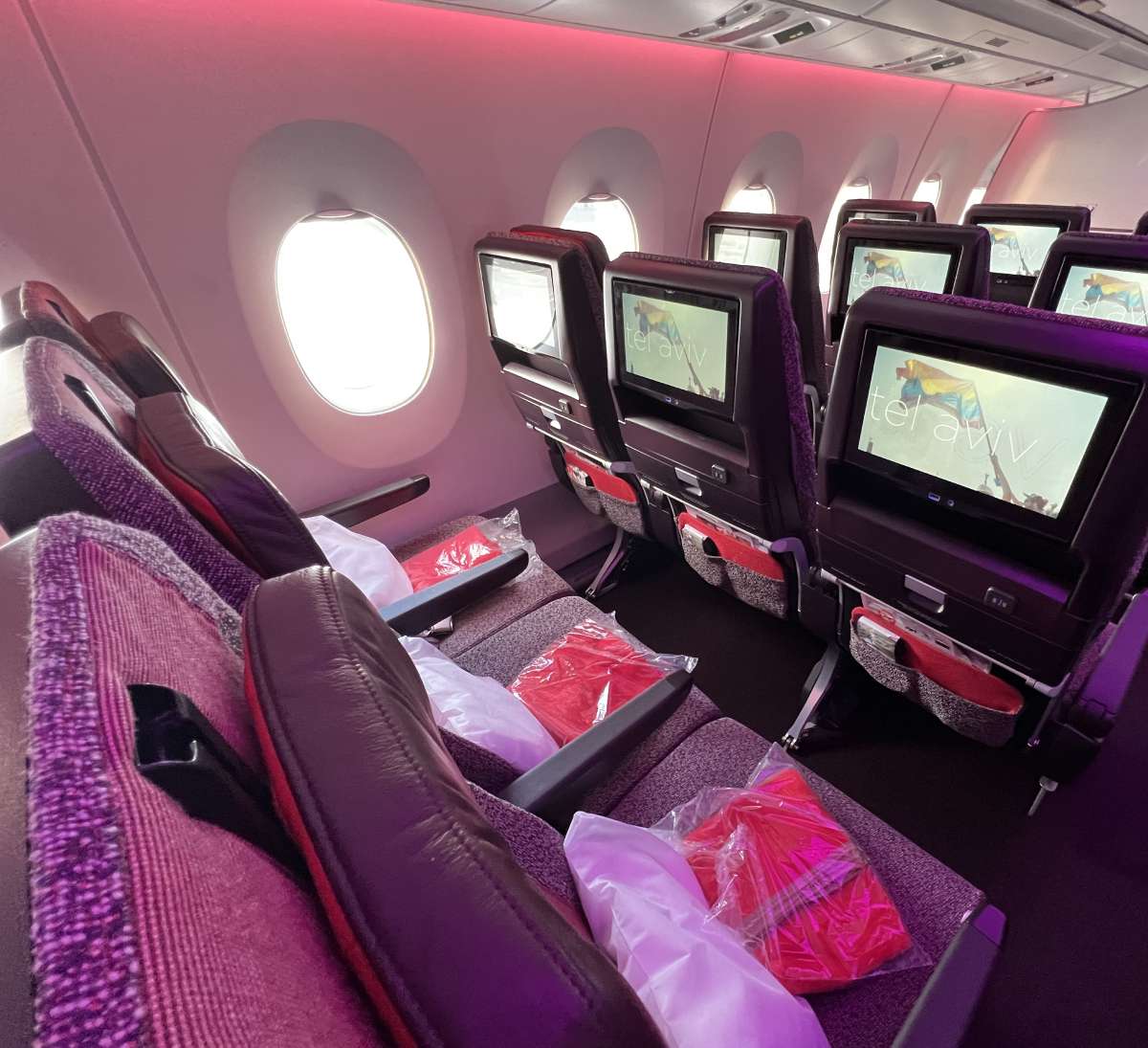 Flying economy is not glamorous but that doesn’t mean the experience needs to be all that bad.

I’ve taken economy flights on multiple carriers between New York and London, the most popular airline route in the world, and I can definitely say there are some differences in the experience across airlines.

Many different airlines fly the route to London including Delta, United, American, Virgin, and more.

While most flights from the US are a redeye and depart in the evening to arrive in the morning, this flight was departing at 8:15 AM and set to arrive at 8:00 PM London time.

I’ve flown the A350 in business class before but I was actually kind of intrigued to see what Virgin offering in economy was. Given business class tickets to London these days are often $2,000+ for a one way, I had no problem sitting in Economy for a 6 hour daytime flight.

This was the first time taking a daytime flight to Europe and I noticed it was significantly cheaper than the nighttime route on my particular date.

The advantages of flying in the day especially in Economy:

The disadvantages of this route are:

I was pretty excited to try this route especially to see how I would feel the following day.

I boarded the plane and always love the lighting on Virgin Atlantic. It has a “cool” factor with the cabin and colors that I find appealing although others may not.

I got to see the premium economy cabin when boarding that is set into a 2-4-2 configuation.

The seats in premium economy looked conformable and similar to what you will see in a domestic first class. The downside to this premium economy is there are 2 seats in the middle making the window sections much more appealing.

As I made my way past the premium economy cabin I was one of the first to board in standard economy. The cabin features the same purple lighting but the seats are outfitted with cloth compared to a leather in premium class.

The economy cabin is split into a 3-3-3 configuration, which makes 3 seats per row in the middle. If this was a full flight you would definitely feel how crowded it was but luckily for me the flight was relatively empty.

I found my aisle seat a few rows in and was ready to get settled. The seat backs looked and felt a bit thin but overall it was pretty comfortable.

The legroom on this flight is typical to what you will feel in any other economy cabin but the A350 design made the cabin feel a bit more spacious.

I immediately noticed how big the IFE screen was and the quality was definitely better than most. I like when airlines outfit updated screens in economy since it’s heavily used especially on a daytime flight.

Now that I was settled it was time for my favorite part of the flight, the food. I tend to like airplane food and more often am interested in the offering of different airlines.

When you typically board a flight to Europe you are served the main meal shortly after takeoff and then a snack upon arrival. What I was a bit surprised to see what the opposite on this daytime flight, where the snack was served first and the main meal was served before landing.

The snack on this flight was a light breakfast that included a yogurt, croissant, and granola. I’m guessing the reason for this is most people want to try to sleep immediately upon boarding but I tend to not be excited about cold meals on airplanes.

The yogurt was actually pretty good and much thicker than normal. It went well with the granola and I also thought the croissant was decent, although a bit cold as well.

If you are planning to take this flight and usually like a decent breakfast then definitely eat something prior to boarding. This breakfast snack is the only offering until about 4 hours into the flight when the main meal is served.

The main meal was served about 1.5 hours before landing into London and started with a snack of pretzels. Followed was a choice of chicken curry or gnocchi, which I wouldn’t have really known if I hadn’t heard someone ask the FA to clarify after the options were “chicken or pasta”.

The chicken curry was served in a box with a bread roll and salted caramel bar for dessert. I actually like the way the box is served since it’s comfortable to fit on your tray table. Comparing this to the way Delta serves there food on plates, which are often an awkward shape and really make the plate like a tray.

The chicken curry was well seasoned and the rice wasn’t too dry. I found the portion to be a bit small but it had good flavor and I actually enjoyed the comfort of a dish like this.

In addition they serve Wine in a can that is actually much more comfortable to drink out of than a glass. When you have limited space in economy all these details matter so i enjoyed how Virgin was serving both the meal and drinks.

Overall economy flights tend to be rather similar but Virgin’s seat, IFE, service, and food tend to be better than most airlines.

The good thing about flying from the East coast to Europe is flights typically arrive early and that’s exactly what happened here. We landed at Heathrow around 7:30 PM, about 30 minutes ahead of schedule.

If I had taken a redeye on this route I knew I would have had trouble sleeping and arrived in London in need of a nap. But this daytime flight made the time fly and I arrived in London with enough energy to make it out for the evening. After one night of slightly later than normal sleep, I was back to normal and refreshed for the next day.

Would I fly this route again with Virgin? Absolutely.

I would also consider economy again and save my money or airline miles since the comfort of business class on a day flight isn’t worth the added cost for me.