Airlines That Serve The Best Champagne 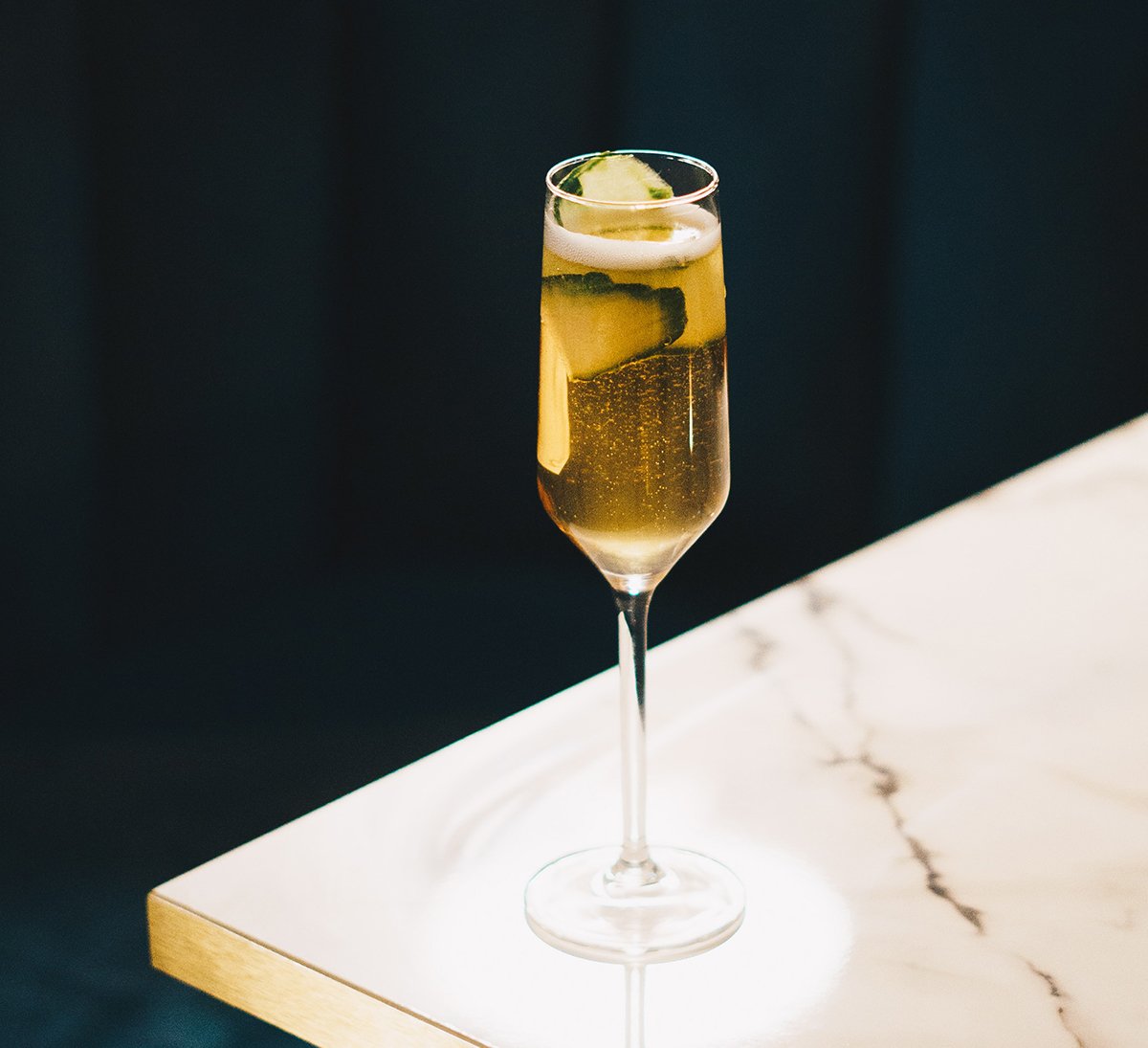 Modern day First and Business class has become synonymous with enjoying some quality Champagne. Even prior to take off you are typically greeted with a glass on the ground and plenty more in the air.

It’s no wonder passengers eagerly seek out some good bubbly and the offerings up in the air can vary dramatically.

We put together a table of all airlines and what champagne they typically serve.

We’ll dive into this guide to tell you what to expect on your next flight and how to score the best bottle in the skies.

If you’ve ever flown in a premium cabin before it’s not ridiculous to say that you get excited about the sound of the bottle of champagne being uncorked. It’s not only the drink but the experience you are embarking on making it an essential part of first class travel now days.

Airlines With The Best Champagne

As you can imagine with service, when it comes to champagne airlines vary dramatically. The chart below maps different champagnes offered by the major carriers and typically all in first class.

There are some common themes you can notice across airlines, especially those that favor Dom Pérignon and others that favor Krug.

Regardless of the type of champagne, each airline will have its own charm in how they serve and more importantly how you enjoy a glass onboard.

Here are some of our favorite experiences:

Only 62,000 bottles of Salon champagne were made in 2002, and Japan Airlines is the only airline that regularly serves Salon, the first-class champagne. The Salon is now only served on JAL flights departing from Japan (because of a scarcity of supply), and Cristal is only served on JAL aircraft returning to Japan.

The Blanc de Blanc champagne, which James Suckling praised, was the crown jewel in JAL’s superb wine and whisky collection.

Given that the total Salon production is less than 1% of Dom Perignon, it is a rare luxury to be able to experience this exceptional champagne. That price isn’t a typo.

Emirates is serious about wine, investing $700 million in beverage programs across all cabins. Emirates has seven million bottles in a temperature-controlled warehouse in Burgundy for carrier storage. Emirates airline has six wine lists, one for each location, with 70 wines offered across the entire network. Apart from the six different wine lists, Dom Pérignon and Château d’Yquem’s staples make appearances. Emirates’ cabin design also included larger glasses and decanters.

In September 2018, the French airline was named “Best Airline Wine List in the World” by the British publication named “The World of Fine Wine.” It was because Air France cooperated with Paolo Basso, who was named the world’s greatest sommelier by the Association de la Sommellerie Internationale in 2013, in addition to having access to its own country’s fabulous vineyards. Air France is committed to exceptional domestic wines in all classes, including free airline Champagne on long-haul Economy flights.

BA has committed $4.5 billion in its customer service department, with a portion of that money going toward enhancing the food and beverage onboard. Passengers in first class can pick between Gusbourne English Sparkling Wine and Lanson Rosé Champagne in flight. In contrast, business class passengers can choose between Canard-Duchêne Cuvee Léonie Brut Champagne and Champagne Besserat de Bellefon. Although BA does not offer a champagne tasting bar like Emirates, the First Class BA lounge at Heathrow does feature a greater range of bubbly for travelers who want to have a glass before takeoff.

Swiss first-class is one of the most difficult items to book using points and miles because the carrier does not release any award space to partner programs and only allows Miles & More elite members to buy first-class awards. However, if you can get a seat, the Swiss first-class experience is fantastic from beginning to end. The Zurich lounge has a large outside terrace for plane observation and free binoculars like the business-class lounge. The Senator lounge also has a whiskey bar with over 220 different varieties from throughout the world, in addition to the first-class champagne Laurent Perrier Grand Siecle.

First-class champagne is selected by world champion sommelier Markus Del Monego and combined with Michelin-starred cuisine onboard Lufthansa. While new wines are introduced every month, Lufthansa is recognized for serving Veuve Clicquot La Grande Dame and Laurent Perrier Grand Siècle, both of which have powerful fruity aromas that retain their essence even at 35,000 feet.

In addition, Lufthansa merits praise for serving Heidsieck Monopole “Blue Top” champagne in its Senator Lounges. This is fantastic non-vintage champagne that, in my opinion, complements the food in the IAD Senator Lounge. If you’re going to be stranded, nothing beats a chilled glass of champagne while waiting to board a United Airlines domestic trip. Although Veuve Clicquot is available at the United Club, I believe it is inferior to Heidsieck Monopole and costs $14 per glass. You’ll pass even if the change in environment isn’t taken into account.

Qantas Airlines is Australia’s third-largest wine buyer, intending to showcase the country’s best regions through the wines they offer. Margaret River and the Yarra Valley are among their choices, as are Tasmania and the Barossa Valley. In Business class, Qantas Airways offers four options that vary per route, and the wine list changes throughout the year. First-class passengers get to enjoy pre-selected pairings with each course during meal service as a bonus. Veuve Clicquot La Grande Dame is the first-class champagne offered by airline. In addition, on request, Qantas flight attendants can pour a tasting flight.

Virgin Atlantic is adored by many. Why wouldn’t you want to? Lanson Gold Label Brut is served! That’s right, the first-class champagne served in Upper Class is the same champagne served on board. There’s no need to wait until after the flight to drink champagne. You’ll sleep much better if you drink a few bottles before boarding.

Mark Pardoe MW, the wine director of renowned UK firm Berry Bros. & Rudd, is in charge of Virgin Atlantic’s wine selection program. A panel of professionals chooses Upper-Class wines four times a year, while Premium and Economy Delight, Classic, and Light wines are selected yearly. With the help of science, Pardoe extended the options and eliminated outdated rules. Higher-acid wines, for example, taste more balanced on the journey thanks to the Dreamliner 787’s improved humidity and cabin-pressurization systems.

Apart from EVA, Virgin Australia is the only airline that offers vintage champagne to its business class passengers. I really like Non-Vintage Lanson Gold Label.  The best thing is that you can pay for this first-class champagne using SkyPesos—it’s hard to imagine you can drink vintage champagne on Delta’s dime!

The top deck bar aboard Qatar Airways’ A380 provides an outstanding in-flight drinking experience. Krug Grand Cuvee, Drappier Rose, and Taittinger champagne are only offered to business and first-class passengers.

Qatar has elevated the in-flight first-class champagne experience to new heights with the creation of its incredibly huge bar.

Aside from the outstanding service, Etihad Airways also offers excellent food and beverage choices. This contains wines and first-class champagnes such as the Bollinger La Grande Année, which have been carefully selected.

Though there isn’t a separate bar on the flight, you can visit ‘The Lobby,’ an onboard lounge. There’s plenty of space to unwind and order cocktails while sipping a glass of first-class cold champagne.

Thai Airways Royal First Class has a Dom Pérignon 2006-touting Champagne selection as well. On most flights, including Thai Airways’ Boeing 747s and A380s, the bubbly is offered.

Get a ticket in Korean’s First-Class section and enjoy a magnificent glass of bubbly from Perrier-Jout Belle Epoque for a truly fantastic glass of bubbly. A bottle of the 2008 vintage, which costs $149, is usually served on Korean Air.

The first-class wine list varies by route. It is updated annually following a two-day blind taste test with a 50-person panel of specialists, including Master of Wine Ned Goodwin, the former wine director of one of Asia’s leading restaurant groups, Global Dining Japan. In April 2016, ANA enlisted the help of Olivier Poussier, the World’s Best Sommelier in 2000, to choose rosé for first class (in June, France’s Champagne Jacquesson Cuvée N740 will be available). Suntory Whisky Hibiki 21 Years Old is also available to first-class travelers.

We saved the finest for last, if you will. Pol Roger Cuvée Sir Winston Churchill and Champagne Barons de Rothschild will be offered on Asiana’s A380 airliner. These excellent Champagnes are very literally refreshing, despite the retail price of $189 a bottle.

While all of these airlines offer first-class champagne, Emirates, Japan Airlines, and Asiana stand out. The nicest part of traveling First Class is that you will receive customized care that will let you rest until you arrive at your destination. And, of course, the greatest way to properly unwind is with a wonderful glass of bubbly.

The Champagne journey begins long before you board the plane. Because some airlines (like British Airways) slap heavy charges on award tickets, responsibly imbibing a few glasses of champagne before boarding can go a long way toward recouping those expenses.

You made a mistake on Cathay Pacific and a couple of Airlines. They serve Krug 2004 Vintage which retails at muchhhhh higher price like $350 a bottle rather than the traditional Krug Grande Cuvee for $169.