Where To Get The Best Burger In NYC 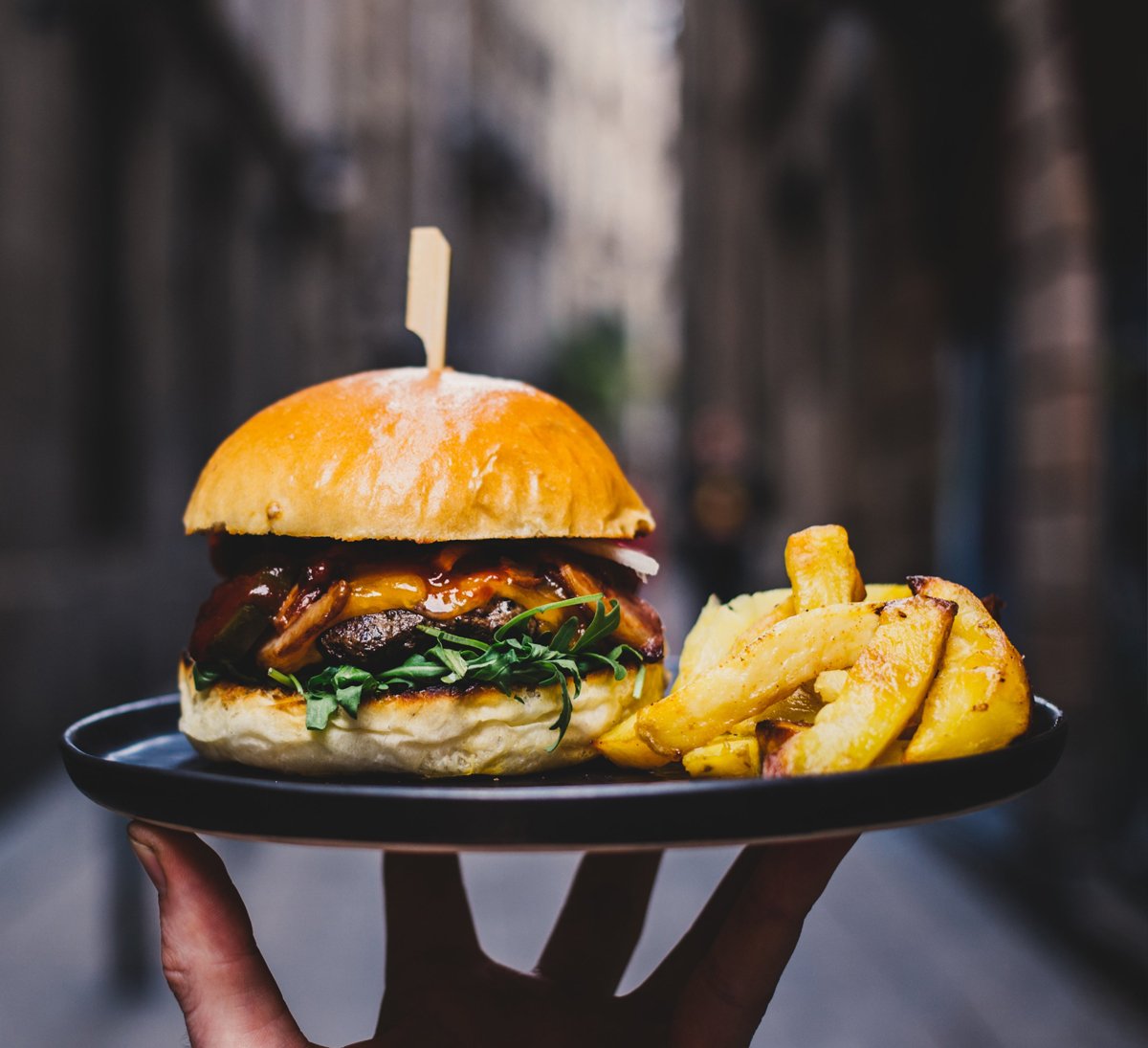 New York City is the mecca when it comes to delicious food. There are just so many different options to sample. From the infamous standard bearers like pizza and hot dogs, to ethnically diverse options, there’s something for everybody to enjoy. In fact, there’s so much to choose from that it can be a bit overwhelming. Restaurant and food stands crowd every street. Instagram influencers can help give ideas of where to grab a bite by showing stunning visual recommendations, but sometimes a deeper dive is needed to suss out the best of the best. And when it comes to finding the best burgers in NYC, there is simply no shortage of candidates.

We love a good burger, and NYC does burgers right. Hamburgers are staples on the menus of most places, and an excellent burger can elevate any restaurant into a must-go trendy hot spot. The types of burgers in the Big Apple are almost as diverse as the city’s residents. There are classic, no frill burgers and decadent hamburgers with wild toppings, and New Yorkers are always pushing the creative envelope to churn out the city’s best. So that begs the question: Just where are the best burgers in NYC?

While it’s hard to crown a definitive winner, these 10 spots will leave you drooling.

Founded in 1972, this burger joint has been slinging delicious burgers to residents of the Upper East Side ever since. A no frills, cash only establishment, JG serves a simple yet delicious cheeseburger. Reminiscent of a great burger you might enjoy at a barbecue, this place is the real deal. Their burgers aren’t huge, but are filling and incredibly juicy.

And while they don’t take reservations and are usually packed to the gills, a burger from JG is well worth the wait. There’s also a second location in the West Village that accepts credit cards, and outside of a rowdy happy hour, seats are usually plentiful.

Don’t let the location on a rowdy West Village street fool you. Minetta Tavern takes their burgers very seriously. An upscale, white table cloth bistro open since 1931, these guys serve the cadillac of hamburgers. Dubbed the Black Label Burger, this signature entree is a heaping behemoth of blended Pat La Freida beef, a mix of short rib, skirt steak, brisket and a dry-aged ribeye. Topped with a generous serving of sautéed onions, this is one of the richer, more decedent burgers on our list.

And while the $28 price tag might raise some eyebrows, each burger is served with a mountain of crispy and delicious french fries. They also offer a less indulgent burger at a smaller price tag, but the Black Label is simply a must try. Minetta gets pretty crowded, so we recommend making a reservation before heading over. When it comes to the best burgers in NYC, almost everyone can agree – Minetta Tavern is at the top of the list.

A sleek and sexy underground West Village hotspot, 4 Charles is a newish and trendy steakhouse dedicated to serving top notch cuts of meat. Fashioned after a speakeasy straight from the roaring ’20s, their burger shines as the menu’s true superstar. A juicy double patty sits between a spongy and buttery bun, and the burger is topped off with melty cheese, chopped onions, pickles and a perfectly cooked, yolky egg. The burger oozes juice to the point that we had it dripping down our arms, but we weren’t complaining.

This burger is advertised as the perfect appetizer to split between 2 people, but good luck trying to only eat one half. Reservations to 4 Charles are near impossible to get, but keep an eye out for a late dining experience, as sometimes tables can open up weeks in advance at the end of the night. We scored a table on a Monday at 10:45pm, and the place was absolutely packed when we left around midnight. For a restaurant with such hype, their burger truly lives up to its billing as one of New York’s best.

While Emily’s calling card might be the pizza, it’s their fantastic burger that leaves people coming back for more. Originally founded in Brooklyn, they’ve also opened up shop in the West Village, AKA the hamburger district of NYC. Their burger is a unique work of art; they use Pat La Frieda Beef and serve it on a perfectly baked pretzel bun, slathered in their signature Emmy sauce with sautéed onions and American cheese. The sauce and cheese ooze out of this burger at first bite to create a completely delicious mess.

This hotspot takes reservations, and it’s totally worth it to grab a couple of pies as appetizers while you wait for the burger to come out.

This Chicago import is managed Hog Salt, the same restaurant group that heads up 4 Charles Prime Rib. While the burgers are similar, they should each be enjoyed in their own right. Au Cheval opened up shop in TriBeCa and is fashioned as a trendy, upscale diner with a chic aesthetic that belies just how seriously they take their burgers. They serve a double patty masterpiece between a buttery bun, with melty American cheese, an egg, chopped onions, pickles, and a generous slab of thick cut bacon.

Their elevated burger is the real deal and simply a must try, and is worth the long waits and far out reservations that may be required..

Heidi’s House by the Side of the Road

We’ll forgive folks if they’ve never heard of Heidi’s House before. This quaint and cozy Upper West Side neighborhood establishment borders on secretive; they don’t usually take reservations and it’s easy to walk right past the storefront without even noticing. But it would be foolish to ignore their seriously good food, and delicious burgers.

Served on a freshly baked english muffin, their burgers are thick and juicy, and come slathered with melty cheddar cheese. Add crispy bacon to elevate this burger to a whole other level. A sneaky and lesser known candidate for best burgers in NYC, trust us when we say Heidi’s belongs on every list.

Come to this legendary Brooklyn steakhouse for the porterhouse, but stay for the incredible burger. Served only at lunch time, their burger is a simple slice of Americana that’s more substance than style. But don’t let the simple look of the burger belie how tasty it is. The mouthwatering flavor that oozes out of their burger is so good that it doesn’t even need cheese to make for an unforgettable lunch. But who are we kidding? Throw on some American cheese to kick it up a notch.

Keep in mind that Lugar’s doesn’t take credit cards, but with their burger sitting as one of the cheapest options on our list, you can eat like a king without breaking the bank.

A new aged bar styled after old school New York classics like Corner Bistro and Peter Lugar’s, Red Hook Tavern has been serving up deliciously simple burgers since 2019. And they’ve made a quite a name for themselves. Their burgers have consistently gotten rave reviews, and for great reason.

They serve a classic style, perfectly juicy chuck of beef, with American cheese, and a slice of raw onion. And that’s it. Don’t bother asking for tomato, or a garnish of bacon. This burger stands out by getting so much flavor with so few ingredients.

A West Village institution since 1961, Corner Bistro has since expanded their operation to Hells Kitchen and Long Island City to the delight of New Yorker’s everywhere. Settle into an old booth and enjoy a meal that’s been enjoyed a countless number of times since they opened all those decades ago.

Their signature is a perfectly cooked Bistro Burger that comes topped with American cheese and a generous mountain of crispy bacon. Looking for something a little more decadent? Order one of their famous chili burgers, and wash it down with an icy cold beer.

One of the oldest restaurants in the city, this salon has been slinging burgers on 3rd Avenue to hungry city residents since 1884(!). With locations now in the Empire Hotel, Financial District, and in Philly and DC, it’s the original location that leaves folks coming back for more.

The burgers are available to order with all the fixings. Mix up different kinds of cheeses, add bacon and eggs, or slather the burger with sauteed onions or even a bearnaise sauce. But it’s the signature Cadillac Burger that we’ve come to love. A perfectly cooked, juicy patty topped generously with American cheese, tomatoes, onions, pickles and finished with delicious double smoked country bacon, this burger is a gut-buster that’s been tried and true for centuries.

*Enjoy a burger recently that you don’t see on this list? Drop us a line, we’re constantly updating our lists, and always on the prowl for more of the best burgers in NYC!