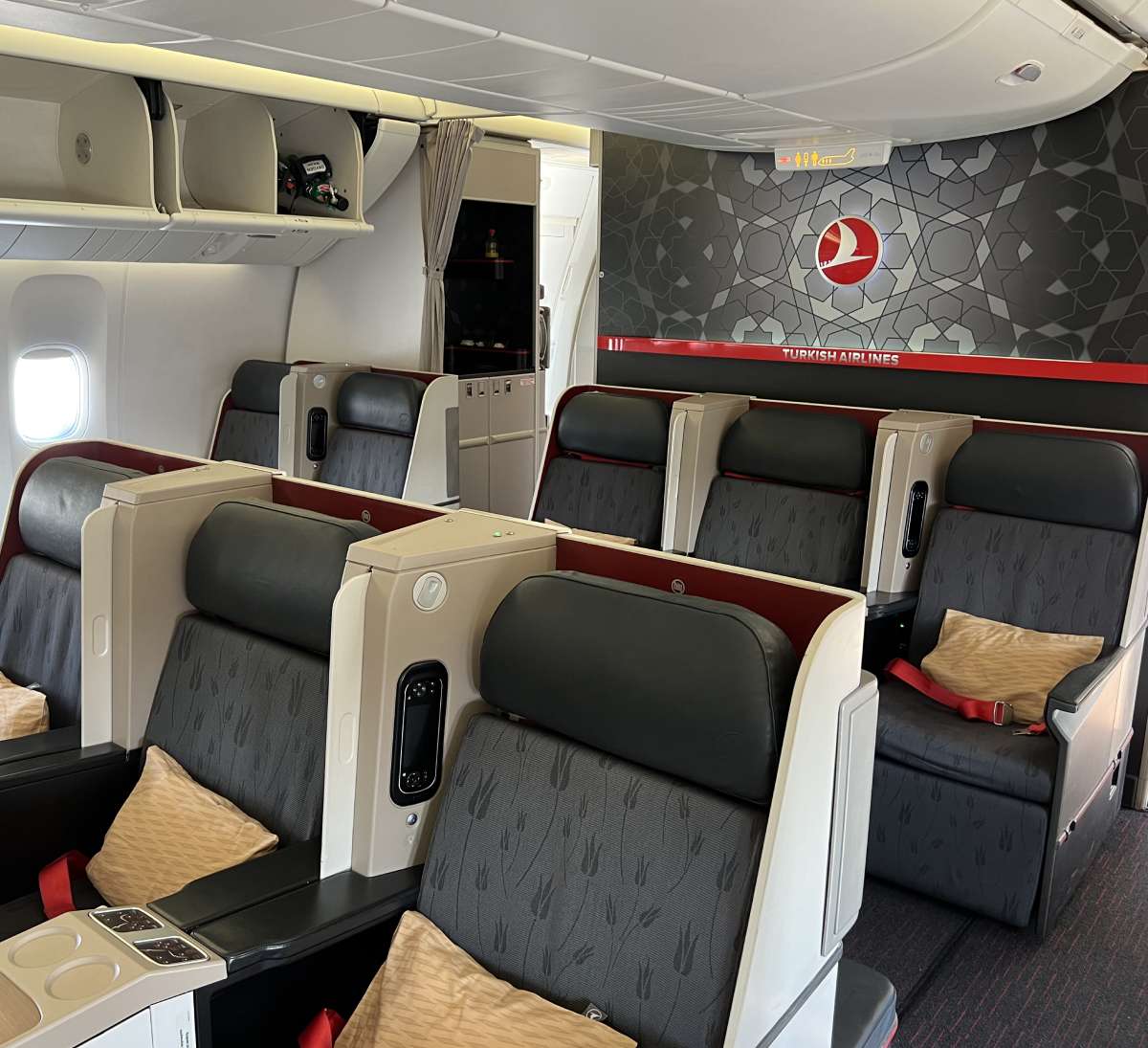 I have flown Turkish a lot recently and it is one of the airlines I recommend every award traveler should use. While it has its issues such as creating a password or buying more than one ticket, it still provides an offering where most airlines skimp on these days.

I have flown both long haul flights from Newark to Istanbul as well as short haul from Nevsehir to Istanbul.

I was departing from Milas-Bodrum Airport (BJV) on a short hop to Istanbul. The airport was pretty small but actually featured a number of different food options and a dedicated entrance as well as lounge for business class passengers.

The flight was on time and we were ready to depart after a little time in the lounge.

It was no surprise we were boarding on a remote gate but the special thing was seeing a 777 up close. In the past I’ve boarded remote gates for small airplanes but this was by far the largest one I got to see up close.

When you compare the 777 on a long haul flight the 2-3-2 configuration is not that competitive but for such a short flight it’s actually a treat to sit in this cabin.

We boarded and given business class is separated into two cabins there was plenty of space for belongings and bags.

I picked the two seats by the window and it was set to be a comfortable short haul flight where I didn’t expect much to be served.

The flight started with a welcome drink where I opted for orange juice. Turkish Airlines welcome tend to have some of the better juices we’ve ever tried on an airline and something I always look forward to.

Here is where the service surprise really came. They passed out menus meaning there was going to be a full meal served on this flight.

It was an early morning flight so there was only one breakfast option of scrambled eggs with cheese, potatoes, mushrooms, cheese, and fruit. Given the short flight this was a pretty extensive offering for a business class breakfast.

As soon as we took off the crew immediately began meal service. The FA presented me with a single tray and shortly followed by bread service.

At first I couldn’t tell if the eggs were going to be good but they surprised me. What I like about Turkeys take on scrambled eggs is they are most definitely never overcooked. These eggs were soft, moist, and had great flavor with the little bit of cheese.

I used my bread as the vehicle for these cheese scrambled eggs and I couldn’t have asked for a better meal to start the day.

I didn’t expect much for a short haul flight and didn’t get a chance to use much of the IFE but Turkish went above my expectations. In an industry where some airlines only serve snack boxes on flights of 5 hours, Turkish does not cut corners and provides a full hot meal even on the shortest of flights.

Given the rate for this flight is only a minor bit above economy I saw it was well worth it to pay a little extra to get a comfortable seat and a hot meal.

This certainly won’t be the last time I fly Turkish but if they solve their customer service issues it may be rated amongst the best out there.