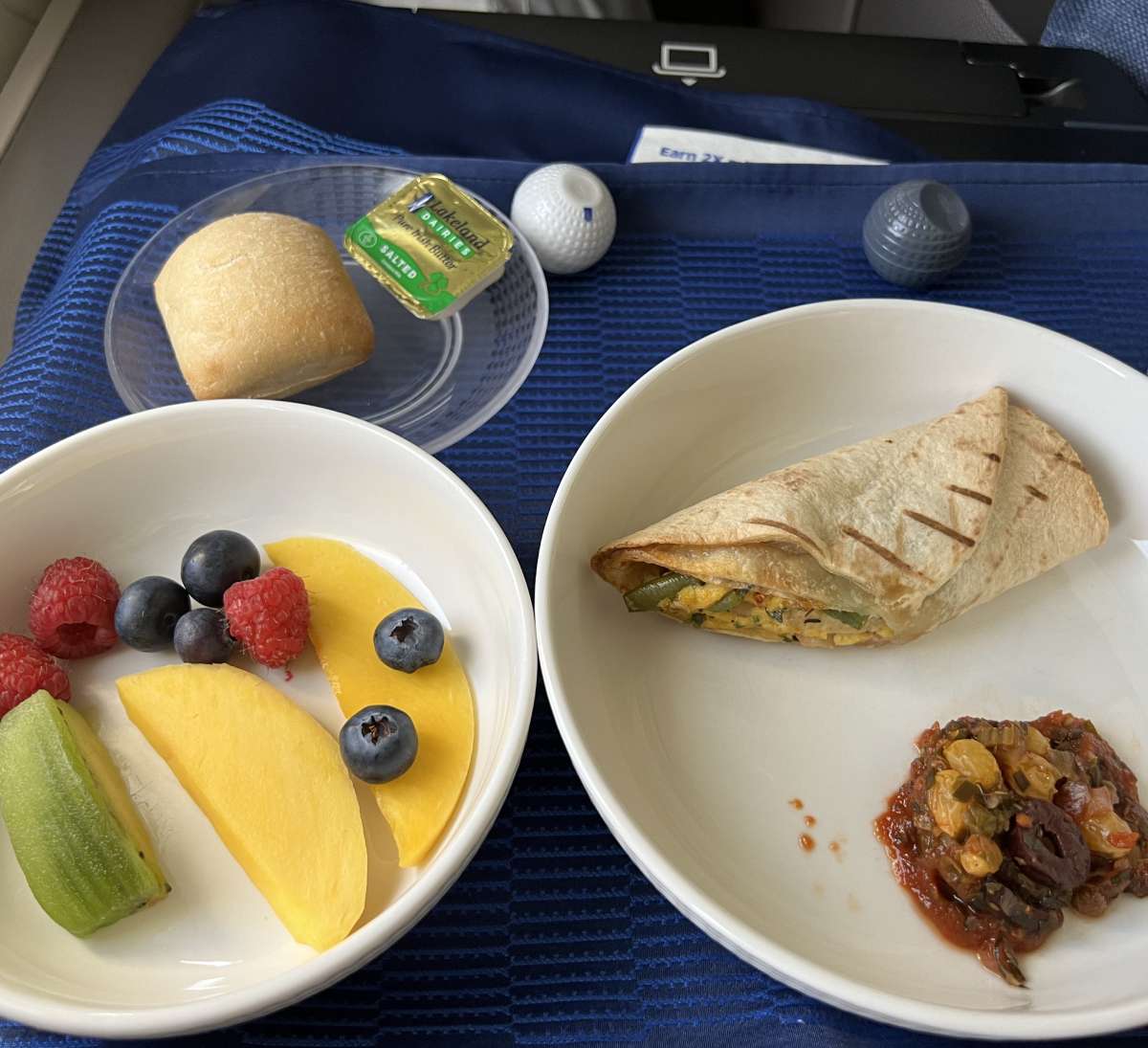 Ever since United released Polaris it has been regarded as one of the best business class products of any American carrier. It is mostly known for it’s comfortably private seat, dedicated lounges, and network of destinations it flies to.

I’ve flown Polaris a number of times including from Newark to Frankfurt and Chicago to London. Not all Polaris is equal as United still flies their old product that I also tried out from Newark to Rome. Each time I did get to check out the United Polaris Lounge, except for my Chicago departure when I stopped into a sub bar United Club due to the Polaris lounge remaining closed.

I always regard food as being one of the most important part of the flying experience, especially on long haul international flights. In the past United Food was actually better than I expected, especially dinner service I received from Newark to Frankfurt.

However, things seem to be going downhill at United especially with the food they are currently offering.

My flight today was a 9 hour flight departing Geneva at 9:45am heading to Newark. I knew the food offering was going to be breakfast, which is not always the best, but at least flying in long haul business class I would get enough food. Or so I thought.

Meal service kicked off shortly after departure with a choice of Breakfast Burrito, French Toast, or Coconut Chia Smoothie. I went for the breakfast burrito, which I figured would be the most popular choice amongst passengers.

Prior to food arriving I received warm nuts and a drink. I was happy the nuts were actually warm, as sometimes United cuts corners and doesn’t bother. However, it was downhill from here for the remainder of the flight.

My “breakfast burrito” arrived and as soon as I saw it I thought there must be a mistake.

Was this a real portion for the main meal on a 9 hour flight? A slim half wrap, few pieces of fruit, and a side of bread?

I was convinced they were missing the other half of my burrito but the flight attendant assured me this was the correct portion.

Just take a look at the size of this wrap. It appears smaller than half of a wrap you will receive in a Pret and thin enough that there was barely anything inside.

This was not a business class “meal”. This was more in line with a snack you serve before landing. Even for that I would think the portion was too small.

I couldn’t really believe this is what they were serving. I dipped the burrito into the sauce and about 5 bites later it was all gone.

In comparison here is a breakfast I received on United Polaris in the past.

Not only was this breakfast much larger but it was considered the “snack” on my flight to London, with the main meal being even larger than this.

In addition the sides to my tiny burrito were equally lacking.

The bowl of fruit looked sad with only a few pieces provided. Couldn’t United at least give me a full serving of fruit with the tiny burrito.

After the “meal” service they came around with dessert. I went with the cheese, which tasted ok but again looked like it was being served in economy.

Unsurprisingly I sat on the flight for 9 hours making frequent trips to the snack cart just to make it through this long flight.

About an hour from landing, and 7 hours since the last “meal”, United came around with their pre arrival snack service.

The option here was the “beef wellington”, which is by far the most generous name you can give this meal.

It’s basically a heated burger enclosed in a bread / pastry with cheese. It was served with at least a bit more fruit this time and a stale cookie.

I know this burger is a United staple but I actually had never had it before so was intrigued to try it.

The bowl of fruit was actually the highlight of this meal and less skimpy than the previous serving.

I cut this burger open to check out how it looked on the insight. In all honestly it wasn’t the worst thing I had but it felt right in line with another economy snack level of food.

The burger was extremely hot but the taste of it with the pastry all just mashed together. It was similar to something you find in the freezer aisle of your grocery store that you nuke in the microwave.

At the end of the meal service I sat there thinking was this really business class food? Especially on a long haul flight?

The short answer is absolutely not. Given a ticket on this flight is about $1,300 each way United should be embarrassed this is what they are serving customers.

With travel roaring back from the pandemic it’s clear United is taking advantage of pushing profits as much as possible. The theory is they believe their hard product is so good they can cut the soft product to a bare minimum and people will still flying.

Honestly, this flight turned me off to United and I’m not sure how much I’ll keep flying. With the lackluster food service, overcrowded lounges, and constant delays they are making it very hard to be a loyal flyer.

Am I entirely giving up on United Polaris? Of course not. However, I will be reconsidering future trips to shift to partners like Lufthansa, Swiss, Turkish, and others that have a substantially better onboard experience.

Maybe United will realize that cutting corners will hurt their bottom line one day. But until that comes expect the bare minimum from United even in a premium cabin.